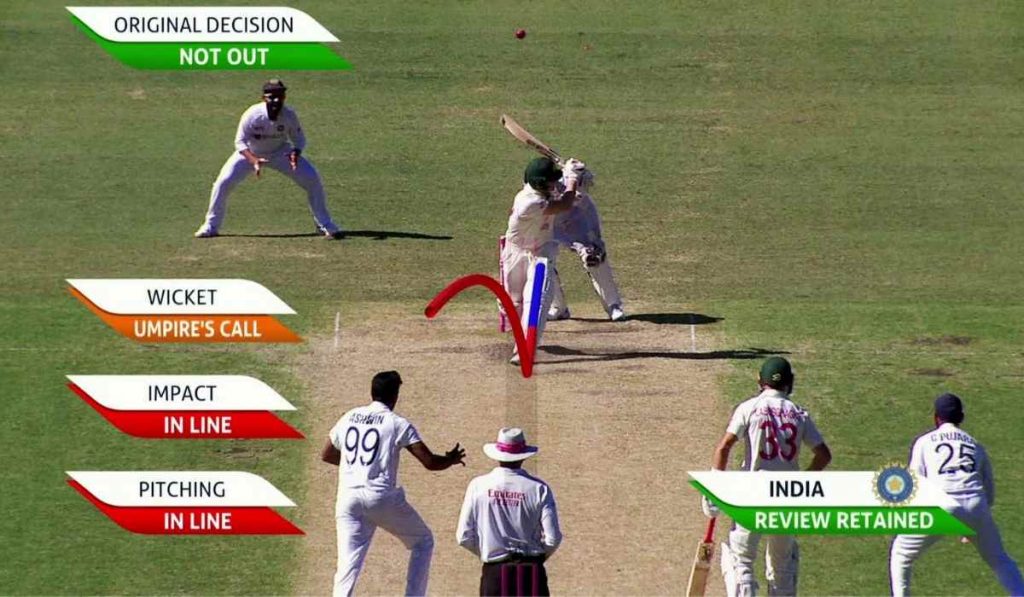 In a baffling and surprising set of events, when India took a review to challenge Umpire’s decision, the ball tracker, also popularly known as Hawkeye showed four stumps instead of the normal 3 stumps on the replay and it left people bamboozled on social media turning the legitimacy of DRS into an argument again.

After India got bowled out on 244 conceding a 94 runs lead to Australia, Ashwin and Rahane decided to challenge a not out leg before wicket decision from the umpire against Steve Smith. The initial replays suggested the ball to be missing the stumps and hence everyone, including the batsman and the bowler got ready to resume the game knowing the outcome of the DRS.

However, the final decision was not made yet and it took an unusually long time for the broadcasters to come up with the ball tracking to determine where the ball was headed. When the final ball tracker replays came, the ball seemed to be clipping the leg stump making it an umpire’s call. The on field call was Not out and hence, the game resumed soon after the decision was made.

But what was unusual during the ball tracking replay was that it showed four stumps instead of normal three stumps which are used in cricket.

They’ve clearly overlaid the stumps here incorrectly. Look where the off stump is on the graphic compared to in reality pic.twitter.com/qFbYXgTyf8

This created a lot of confusion among viewers who failed to notice the moment on their screen and they were left in shock after seeing these replays. Fans had a lot of unanswered questions. Some of them saw the funnier side of it acknowledging the mistake made by the technicians while some also questioned the legality of DRS on social media accusing the home broadcasters to tamper with the DRS.

Now I know why it took so long https://t.co/ExvaATqAUE

Australian ball tracking technology has been worst since start of the series, many problems with umpires call and now this.. https://t.co/7SbmYIQQ5J

Four stumps – the guy handling DRS had a few drinks too many 😂 https://t.co/aN9X3pafBb