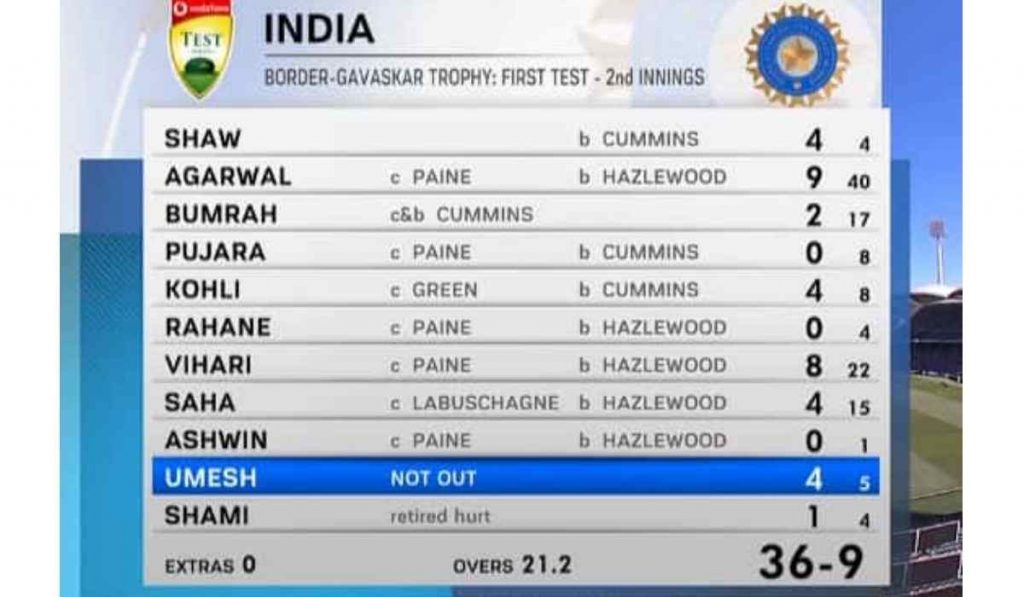 In an outrageous morning of Test cricket at Adelaide, India lost 8 wickets for 27 runs to end up the inning at 36-9 which is now their lowest score in Test cricket, ever. The wickets fell like a pack of cards and there was no stopping to the collapse. It was a morning which will haunt the Indian fans forever but as fans of Test cricket, people also got to watch some quality & relentless fast bowling.

This was India’s worst inning in Test matches but what other matches make the cut into top 5? We take a look at India’s 5 lowest scores in Test cricket from the archives.

India getting all out on 66 against South Africa back in 1996 stands at 5th in this list. India went into that match under the leadership of Sachin Tendulkar in Durban. They restricted South Africa to 235 in the first inning after losing the toss and hoped to take some lead or at least get closer to that total. Instead, they got bundled out on 100. With a 135 runs lead, South Africa scored 259 more runs in the second inning and set India the target of 395 runs on the board.

India in their chase, got off to a horrendous start and they never recovered from it. The Proteas bowlers bowled them out on just 66 in 35 overs with Rahul Dravid top scoring for India with 27 runs. He was the only batsman who went into the double digit. That side had some of the greats like Sachin, Dravid, Ganguly and Azharuddin but they were made to seem clueless by some extraordinary bowling from Allan Donald & co. Donald took 4-14 and he was the best bowler in the entire match.

The 4th story in this list takes us back to 1952, when India were bowled out on a mere 58 by England in the first inning. The worst part about that Test match for India was that they were again bowled out on just 82 in the second inning while following on.

It was the third Test of India’s tour of England back in 1952 and after winning the toss, England batted first and piled up a score of 347-9 in the first inning. What followed in India inning was a procession. Two Vijays, Vijay Manjrekar and Vijay Hazare got into the double digit with the former one being the top scorer with 22 runs. 4 batsmen got out on 4 while 2 bagged ducks as well. For England, Fred Treuman took 8 out of those 10 wickets. In the second inning, India were bowled out for 82 again with 3 batsmen reaching the double digit this time.

The third in this list belongs to Independent India’s first tour of Australia, or rather any overseas tour after independence and India would surely not like to remember what panned out in the first inning of the Brisbane Test. That match was 73 years ago so many of the fans wouldn’t be alive either to remember the collapse but it still is intact in cricket’s history books.

This was similar to India’s 58 all out against England. Australia won the toss, scored 382-8 declared in the first inning and then bowled India out on just 58 in the first inning. Captain Lala Amarnath top scored for India with 22 runs. Following on in the second inning, India were again bowled out on only 98 runs.

Before the Test match which ended today, 42 All out used to be India’s lowest total in Test cricket and it was something they were looking to avoid today. This match was played in 1974 at Lords and had the likes of some of the legends like Sunil Gavaskar, Ajit Wadekar and ishan Singh Bedi involved. England won the toss and scored 629 runs on the board. India also responded bravely with putting up 302 runs on the score board but it wasb’t enough to save the follow on.

Following on, India backed their first inning brave performance with a disaster. Eknath Solkar scored 18 runs and that was the highest score of the inning as India capitulated to 42 runs all out. The second highest score in that inning was just 5 runs and it came from 3 batsmen while 2 were dismissed on 0 too. India lost the match by an inning and 285 runs.

And the latest one, which is also India’s worst performance in Test cricket came in December 2020 when India gave away the all important first inning lead of 53 runs and surrendered at a score of just 36 runs to create an unwanted record. After scoring 244 and bundling out Australia on 191, India were in the position of some strength and just a decent 2nd inning performance would’ve given them the chance to look at the win but it didn’t happen. The morning started horrendously for India with night watchman Bumrah getting out which started a collapse. None of the Indian batsmen crossed the single digit score and the scorecard looked more like a baseball score. Mohammad Shami got hit on his wrists which is why he was retired hurt and that saved India from getting all out but not from the embarrassment of their lowest Test score, ever.